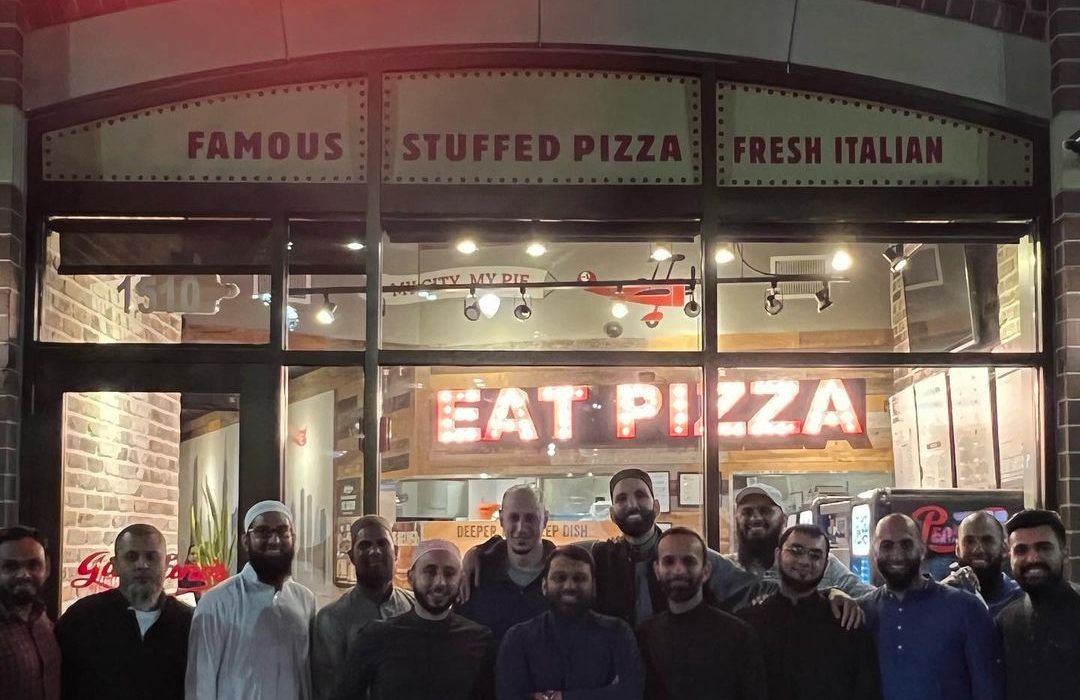 I begin with the name of Allah, the Compassionate, the Merciful.

This past weekend I was invited to present at the 18th Annual Imams Conference organized by the Assembly of Muslim Jurists of America (AMJA). I have attended the conference about ten times before but have never submitted any research papers, despite being asked to, due to my busy schedule. This year, I pushed myself to submit something, the paper was accepted, and I was asked to present.

My trip to Chicago began on Thursday September 8, 2022. I was happy to find my friend Shaykh Muzzammil Dadabhoy and another local friend Hassan Ilyas on the same plane. After landing and checking into the hotel, we decided to get some food since Chicago is known for its delicious halal food options. We chose one of the few places that was still open called bumper burger. It was an expensive uber ride there and back, but it was a nice experience. Shaykh Muzzammil is one of the few scholars who has both a degree in Islamic Law from Umm ul-Quraa University in Makkah as well as an American law school degree from USC. Due to our busy schedules, many Imams who even live next to each other sometimes get more personal time at an annual Imams conference out of state than in their own localities.

After praying Fajr, my roommate and friend, Shaykh Umer Khan, scheduled some time with Shaykh Akram Nadwi for us. Shaykh Akram is a world-class scholar and specialist in hadith. I have not seen him in a few years so wanted to get some personal time. He likes to go for walks, so we decided to walk together while I spoke to him and asked the questions that I had written down for him almost a year ago. He is currently completing a multivolume commentary on Sahih Muslim so I wanted to make sure I ask some questions related to that, since the ideas would be fresh in his mind. It was a very beneficial walk. Then we grabbed some coffee and sat down in the lobby and kept talking about community issues in general. He is very generous with his time.

I had no interest in eating breakfast since the food from last night sufficed. I prepared for the khutbah I would give at the Islamic Center of Wheaton. My friend Shaykh Amir Saeed, who studied with me when I was in Nadwa, India and Cairo, Egypt is the part-time Imam there. He is also a cofounder of the Mad Mamluks podcast. I could not refuse his invitation. He asked me to give the khutbah on the topic of LGBTQ because he knew I have researched that topic well and because most Imams will not tackle that issue. I felt a little tired of speaking about this issue, since I do it so often, but it was very well received. People kept commenting that they are so frustrated about the hegemony of the LGBTQ lobby but almost no Muslim leaders clearly address the issue. Several attendees said they felt a great relief that it was finally addressed with clarity and confidence.

I was able to make it just in time to join a lunch with the General Secretary of AMJA, Shaykh Salah Alsawy who was meeting Shaykh Akram Nadwi (who recently became the newest official member of AMJA). Shaykh Salah has been a professor at Al-Azhar University in Egypt and Umm al-Quraa University in Makkah. He is a prolific scholar and has led AMJA for many years. We were joined by others as well and enjoyed discussions around politics, ethnic food, and other issues. Both scholars have a great sense of humor that often is not seen in large gatherings.

The conference usually begins around 7PM local time. I picked up my badge, opted to not take the massive booklet containing the research to save paper (since I had the electronic copies already), and headed to the conference hall. I did not count but there must have been about 150-300 people at the conference. At least half, or more, must have been Imams/Religious Directors from various parts of the USA. The conference usually begins with an introduction and prayer and is then followed by a research paper. The first paper was about social media and its harmful effects. It was not so much a specialized topic but the data was beneficial nonetheless. During the Q&A session some scholars tried to convince the presenting panel to at least say that TikTok is haram as a default, but they were unsuccessful. Saying that something is prohibited in Islam, when it is not, is telling a lie against Allah, so scholars are very cautious.

I was quite tired and knew that I would have to present early morning the next day. Many people like to drive out to Devon Street for food, but it is quite far from the hotel: about a 45 minute drive each way. Fortunately, my social circle decided to eat at the conference and only go out for dessert afterwards. We ate some ice cream at a place called Jeni’s Splendid Ice Creams and headed to bed.

We woke up early to pray Fajr with all the Imams who had arrive by them. It was a blessed gathering. Myself and my roommate Shaykh Umer Khan had written on thirteen different topics, so we were asked to either present or be on a panel related to those topics. We were on the stage for probably more than half the conference, which is quite rare, but it was due to us writing on so many different topics. My main presentation went well and there was a lot of positive feedback, but since they gave me the early morning session, many people didn’t make it and about half the room was empty. Throughout the day I continued on stage fielding questions from the audience as the other topics were presented.

I was invited by Shaykh Yasir Qadhi to attend a private meeting between himself, Shaykh Omar Suleiman, and the AMJA leading scholars. It was a privilege to be in such a gathering. I cannot disclose what the discussion was about, but being in the company of “celebrity scholars” who have millions of followers online tends to humanize them, even though I have known them before they became so famous. Having personal, private discussions opens up the hearts to connect.

For dinner we went to the only Halal Giordanos for some deep dish Chicago style pizza. There were many scholars present in the blessed gathering including Shaykhs Yasir Qadhi and Omar Suleiman. I made sure to place myself next to them for maximum benefit. Sometimes even organizing where people will sit requires some strategy. We had a very frank discussion on many issues. I was surprised to see Shaykh Yasir so eager and willing to address any topic that anyone wants to discuss.

Private Gathering with the Shaykhs

After dinner, many of the group somehow miraculously had room for dessert but I managed to slip into Shaykh Akram’s hotel room for a private session with his most dedicated students, and Shaykhs Omar Suleiman and Yasir Qadhi also joined. The discussions that happen when you are only surrounded by students of Islamic knowledge are very different than those in a social gathering. We spoke about many subjects and Shaykh Akram, as is his habit, did not hold back from mentioning his views on certain issues.

After Fajr I managed to get some private time with Shaykh Jamal Zarabozo. He is a convert to Islam and has written many books. He is known for his meticulous research on issues so it was very beneficial asking his thoughts on the evolution of the Islamic Finance sector over time in America.

At 7AM I had scheduled a podcast recording by my friend Maheen. He was one of the cofounders of the Mad Mamluks podcast but then started his own. He brought all his camera equipment and setup in my hotel room. We spoke about Professor Cal Newport’s book Deep Work and how to live a meaningful live. We also dabbled into Jiu Jitsu, computer science, and many other topics.

I had to continue presenting on more topics at the AMJA conference so I did that while Maheen packed up all his equipment.

We headed for an Islamic Seminary called Darul Qasim. We caught the end of the Tafsir class by Shaykh Amin Kholwadia. He is a respected senior scholar who graduated from the famous Darul Ulum Deoband in India and then founded this seminary. We took a tour and experienced an intricately renovated campus which paid attention to every little detail. Each room in the building is named after some famous personality that reflect the purpose of that room. The décor and style was an ideal mix between the ultramodern and the traditional. It seemed like a fantastic school.

After one seminary, we went to another one nearby called Darus Salam. This is a massive complex which I have never seen before in America, outside of the Diyanet Center in Maryland. It has a full time seminary and a high school. Everything in the facility is state of the art. I was given a tour by the son of the founder Mufti Azeemuddin Ahmed. He was very generous with his time. It was shocking to hear that all twenty teachers in the seminary were born and raised in America and are in their 30s and 40s. They have an entire section dedicated to sisters and even have their own female Shaykhah for womens affairs, something people talk about but have never seen in practice.

After visiting the seminaries I headed to the Deen Show to record with Eddie. He actually runs a Jiu Jitsu studio under where he does his recordings. Eddie became very popular because he would interview scholars and guests on different Islamic topics. People from around the world have been watching his show for years. I have been on the show several times before. This time we did a short show because we were on a time crunch. The topics were about the AMJA conference, the new gender curriculum recently launched in Chicago, and a few other topics.

Eddied dropped me back to the hotel and I caught the conclusion of the conference. They announce that the next conference would be in Houston and the topic would be medical issues. They gave people a chance to give their suggestions and documented each one. We took a group picture of whoever had not left by then, and I headed to the airport.