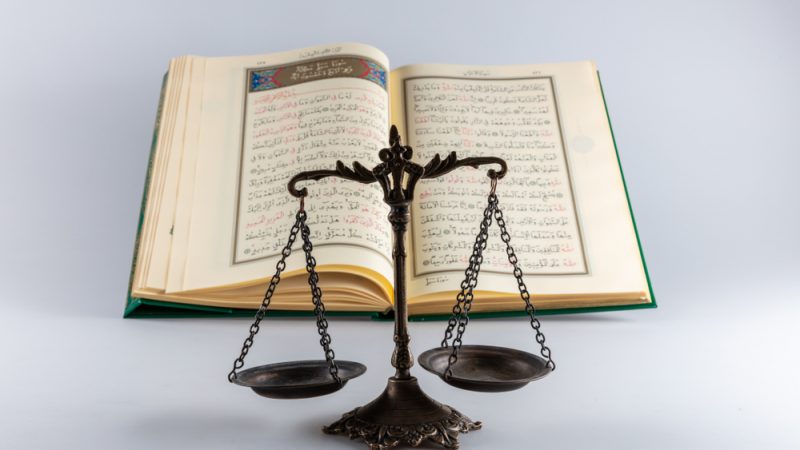 Islam teaches certain rules that help people live the way Allah wants them to. In the Qur’an and teachings of the Prophet Muhammad, there are several dos and don’ts, as well as recommendations. Collectively, these practical teachings are known as the Sharīʿah, which linguistically means ‘path’ or ‘way’.

Sometimes it might seem there is no purpose behind these rules, and they are only there to test people whether they will obey Allah or not. This is tantamount to being told to stand on one leg for no good reason except to test the obedience of someone. For example, the Qur’an mentions in the story of Prophet Dāwūd [David]: “When Ṭālūt [Saul] set out with his forces, he said to them, ‘Allah will test you with a river. Anyone who drinks from it will not belong with me, but anyone who refrains from tasting it will belong with me; if he scoops up just one handful [he will be excused].’ But they all drank [a lot] from it, except for a few.”[1] The Qur’an makes it pretty clear that this was merely a test of obedience for the soldiers, and there was nothing intrinsically wrong with drinking the water.

The question then arises: what about all the rules that Islam has prescribed? Are the obligations to speak the truth, be just, wear modest clothing, pray, fast, and give charity also just tests of obedience, having no intrinsic value? Is avoiding alcohol, drugs, pork, adultery and fornication, interest and usury, and slander also just tests of pure obedience, or is there some greater purpose to these rules? Muslim scholars asked the same question over a thousand years ago and concluded that there is a definitive purpose, not for just some rules in Islam, but for all of them.

One of the earliest Muslim scholars to write in detail about the underlying purposes behind the teachings in Islamic Law was the Sufi philosopher Al-Ḥakīm At-Tirmidhī [d. 255/869]. He searched for the hidden wisdom behind the legal rulings in his writings and was one of the first scholars to employ the term ‘higher objectives of Islamic Law’ [Maqāṣid Ash-Sharīʿah]. The term Maqṣad, plural Maqāṣid, may be translated as ‘higher objective’ or ‘underlying intent’. It refers to the end result of what something is aiming to accomplish. It became clear to early Muslim scholars, after analyzing all the rules in Islam, that beyond the apparent objective of every rule, it also had a higher objective: to ultimately achieve benefit [maṣlaḥah] for people or prevent harm [mafsadah] from them. Furthermore, they understood that the intent and higher objective is sometimes explicit in the Qur’an and Sunnah, but at other times requires a deep understanding of how Islam manifests with the framework of time and space.

Later, scholars of Uṣūl Al-Fiqh [Jurisprudence Principles] such as Al-Juwaynī [d. 478/1085] in his Al-Burhān and his disciple Al-Ghazzālī [d. 505/1111] in Al-Musṭaṣfā were among the thinkers that developed the idea of Maqāṣid further. They classified five major elements that Islamic Law aims to preserve: human life, intellect, property, family, and religion. They further divided the higher objectives into a scale of benefits: essential [ḍarūriyyah], necessary [ḥājiyyah], and complementary [takmīliyyah].

A few centuries later, Abu Isḥāq Ash-Shāṭibī [d. 790/1388], who grew up in Granada, Spain wrote Al-Muwāfaqāt, and is considered to be the pioneer of objectives-based jurisprudence. His book continues to be widely studied today and his refined methodology helps people understand and appreciate the Divine Wisdom within Islamic teachings, rather than contenting themselves with a superficial focus on the rules without much reflection. Furthermore, comprehending the higher objectives [Maqāṣid] is a prerequisite to resolve contemporary issues in Islamic thought that constantly arise.

The teachings of Islam came to benefit [maṣlaḥah] people on an individual and communal level, and to avert harm [mafsadah] from them. Upon a complete analysis of all Islamic injunctions, it becomes clear that the teachings aim to preserve five things: human life, intellect, property, family, and religion. For example, the prohibition of murder, alcohol consumption, theft, adultery, and fleeing from the battlefield without an excuse all aim to achieve preserving those five things, in that order.

The higher objectives are furthermore divided into a descending scale of benefits: essential [ḍarūriyyah], necessary [ḥājiyyah], and complementary [takmīliyyah]. An essential ruling would be like the prohibition of murder, without which life would be completely lost, and this would endanger society as a whole. A necessary rule would be something like the prohibition of a monopoly in an economy, since it preserves the wealth of people. It would cause harm but not destroy the entire economy. A complementary ruling helps to achieve the highest quality in the five objectives mentioned above. For example, the principle of averting the gaze and wearing modest clothing protects the family system from falling apart. Immodest clothing may not automatically result in adultery and fornication, but it helps to curb it.

When there is a conflict between rules in two of these categories, the essential has the highest precedence, then the necessary. For example, praying in congregation helps to preserve the religion, but it is not essential. If praying in a group puts someone’s life in danger, they must pray individually since the preservation of life is essential, while group prayer is of a lower classification.

The rules in Islam were not prescribed for no reason whatsoever. Muslim scholars have always understood this. There is a benefit either for the individual or for society in everything that Allah has commanded or forbidden. When we understand this, it is easier to resist the selfish urges to rebel against the Creator and become a true servant of the Most-Knowledgeable, the Most-Wise.