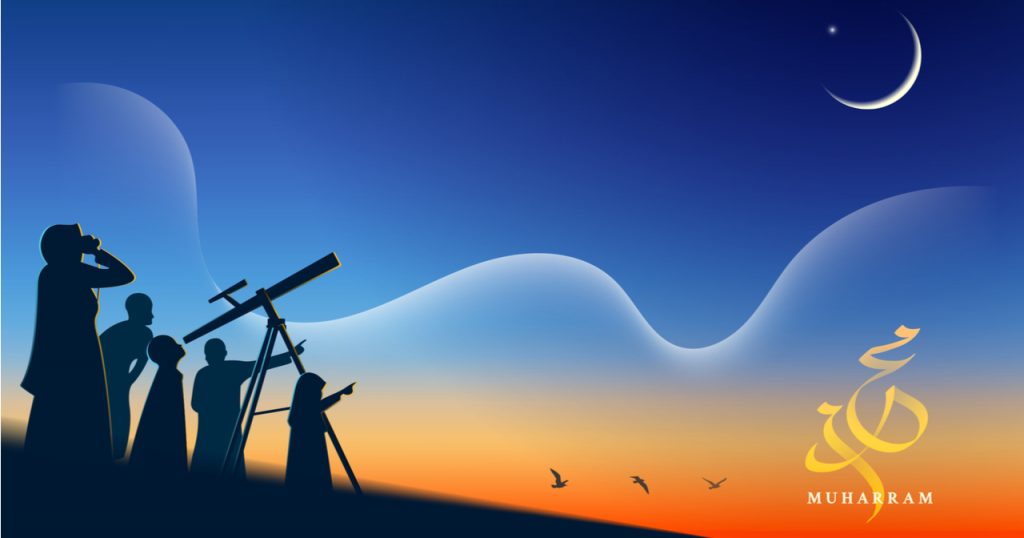 How the Islamic Calendar Works

The first year of the calendar begins when the Prophet Muhammad migrated from Makkah to Madinah, known as the Ḥijrah, in 622 C.E. He, along with his early followers, fled persecution and established a new Muslim society.

The Islamic calendar was determined in the year 16 A.H. during the reign of the Caliph ʿUmar. He consulted with the senior Companions and they decided that Muslims should have their own calendar and dates, just like other civilizations and religions have.[1] Someone suggested adopting the Persian or Byzantine calendar, the way that Muslims were using their coins at the time, but this idea was rejected. Others suggested dating the calendar from either the birth or death of the Prophet, the start of revelation when he was forty years old, or the migration from Makkah to Madīnah. The latter idea was adopted since it marked the transition from being an oppressed minority to having an independent community.[2]

The Companions and early Muslims did not actually celebrate the new Islamic year by greeting each other with phrases like “Happy New Year” or anything to that effect. Nonetheless, if no one considers it to be a religious practice or something recommended, then such greetings are fine. It is important for Muslims to be aware of the Islamic calendar and at least know what year it is, even if they are not referring to it regularly. Such a practice maintains a connection with Islamic History and reminds them that Muslims have certain distinguishing characteristics, which establishes their unique Muslim identity.

Four Sacred Months in the Qur’an

The month of Muḥarram was declared special in the Qur’an: “Indeed, the number of months in the sight of Allah is twelve. This was decided by Allah on the Day when He created the heavens and the earth. Four of them are sacred. That is the right religion, so do not wrong yourselves during them.” [Qur’an – At-Tawbah 9:36] The Prophet Muhammad specified these months: “The year is twelve months, of which four are sacred: three consecutive months of Dhul Qaʿdah (11th), Dhul Ḥijjah (12th), and Muḥarram (1st), while the fourth is Rajab (7th).”[3] These months were originally established from the time of Prophet Ibrāhīm [Abraham] and even maintained by the pagan Arabs before Islam, where they would forbid warfare so that people could travel and conduct business, and perform Pilgrimage to Makkah safely. After the Qur’an was revealed, these months were affirmed to have special status, and even enhanced more.

The Prophet said: “The best days to fast after Ramadan is in the ‘month of Allah’: Muḥarram.”[4] So it is recommended for you to fast more in this month than in regular months, if you want to earn extra reward. The 10th of Muḥarram is extra special and is known as the day of ʿĀshūrā’.

This year it will be on Monday Aug 8, 2022. Based on several authentic statements of the Prophet Muhammad, it is strongly recommended you fast on this day. ʿAbdullah ibn ʿAbbās related that he had never seen the Prophet so keen on fasting any other day, outside of Ramaḍān, than on the day of ʿĀshūrā’.[5] The Messenger of Allah emphasized fasting on this day to such an extent that he once said, “I hope that Allah would forgive the sins of the previous year for the one who fasts on the day of ʿĀshūrā’.”[6]

Near the end of the Prophet’s life, he wanted Muslims to differentiate themselves when he heard that Jews and Christians also commemorated it.[7] So he said: “Next year, God-willing, we will fast on the 9th [as well]”, but he passed away the following year.[8] After a detailed analysis of all the teachings of the Prophet relating to fasting on the day of ʿĀshūrā’, Imām Ibn Ḥajar al-ʿAsqalānī [d. 852 A.H./1449 C.E.] concluded that there are three different ways to fast this day, in order of ascending virtue: [9]

There are some narrations that indicate other virtuous acts on the 10th of Muḥarram but those reports are not very authentic.

Some people believe the month of Muḥarram is unlucky so they avoid getting married or traveling at this time, but these are baseless superstitions. Another misconception that has occurred in the minds of many Muslims is that the 10th of Muḥarram should be observed as a day of mourning because Ḥusayn ibn ʿAlī, the righteous grandson of the Prophet, was killed on this day. It is true that the day he was killed was indeed sad and a great tragedy. However, many righteous people have been killed on other days, yet none of those dates have been taken as days of mourning.

Ḥusayn’s own father, ʿAlī, was also killed unjustly in the month of Ramadan in the year 40 A.H. but no one has specified that day as a day of mourning to be observed by Muslims. Furthermore, the Messenger of Allah witnessed the slaying of many of his family members who were very dear to him such as his uncle Ḥamza, his adopted son Zayd ibn Ḥārithah, and his cousin Jaʿfar [ʿAlī’s brother], yet he never appointed a day of mourning for them. Therefore, although it may be beneficial to reflect on the martyrdom of Ḥusayn and the historical lessons that can be derived from such an incident, there is no basis for singling out his death as a day of mourning.

[3] See Bukhārī #2958. This does not negate the fact that Ramaḍān is still the most sacred month of the year.

[7] Another Ḥadith explains: “The Prophet entered Madīnah and observed the Jews fasting on the Day of `Āshūrā’. He asked, ‘What is this?’ They said, ‘This is a righteous day. It is the day that God saved the Children of Israel from their adversary, so Moses fasted.’ The Prophet said, ‘We have more right to Moses than them.’ So he fasted and ordained fasting on that day.” Muslim scholars have often speculated what fast the Jews were observing on the 10th of Muḥarram circa 622CE as recorded in the Ḥadith. Was it Pesach (Passover), Yom Kippur, or a lesser fast like Asher b’Tevet? However, the dates seem to not coincide between Passover and `Āshūrā’ until over a decade after the Hijrah and even then Passover falls on the 18th of Muḥarram, and not the 10th. Shaykh Abul Ḥasan ʿAlī Nadwī clarifies the confusion as follows: “Besides, any attempt to make the Lunar Arabian Calendar correspond to the Solar Jewish Calendar can, at the best, be only hypothetical. The ancient custom of intercalation has also taken a hand in adding to the confusion. It is incorrect to question the authenticity of successive Ḥadīths merely on the basis of an erratic and inconstant calendar. It is also possible that the Jews of Madīnah were different from the other Jewish communities where the fast of ʿĀshūrā’ was concerned and observed it with greater enthusiasm and regularity, and, in this respect, they were similar to the Arabs who, seeing that so many important events had taken place on that day, fasted on it out of reverence. ʿĀishah said, “The Quraysh fasted on the day of ʿĀshūrā’ during the Age of Ignorance and the Prophet also kept it.” [Ṣaḥīḥ Muslim] Further, the fast days among the Jews living in different countries differed from one another. We have seen how in the Jewish Encyclopedia it is indicated that apart from the fixed fast-days many fasts of a local or national character had become established among the Jews from the early days, which varied from place to place. Private fasts were also common among the Jews and one could take it upon oneself to fast on certain days in memory of certain events or at the time of adversity to arouse God’s mercy. In these circumstances, it is quite possible that the fast of ʿĀshūrā’, on the tenth day of the first month of the Arab Calendar, was peculiar to the Jews living in Arabia alone. Perhaps, it is for this reason that the Talmud and the Jewish Calendar are silent on this score. But their judgment is influenced by the ignorance of the habits and practices of the Jews living in various parts of the world, especially in Arabia where they had been settled for generations as a distinct community, possessing their own beliefs and customs and receiving local impressions in the historical course of things.”